Pejac (previously), real name Silvestre Santiago, is a Spanish painter and street artist whose works include outdoor murals, often utilising trompe-l’œil techniques. Santiago was born in Santander, Cantabria, Spain in 1977. He studied fine art, first at Salamanca, then Barcelona, and finally at Accademia di Belle Arti di Milano “Brera”. He worked at Norway’s NuArt Festival in 2015. The same year, he painted site-specific works in Hong Kong and Tokyo. He has also worked in the Husn refugee camp in Amman, Jordan, creating silhouette images by scraping paint off old walls. As of 2014, he was again living in Santander.

According to an artist: “The idea of the “Strength” project arises as a gesture of gratitude to the health workers of Valdecilla for their work in general and during this COVID crisis in particular by offering them what I do best, which is painting.”

“Marking this historic moment in global history, a pandemic that strongly affected my homeland, taking over 50,000 lives so far, I recently created 3 interventions at University Hospital Marqués de Valdecilla in my hometown Santander. Titled after the quality of being strong, much-needed in the world we live in today, and especially within the walls of a hospital complex, “Strength” addresses 3 different aspects of the current crisis and proposes ways we could respond to them.

From the first moment, the hospital has been receptive and enthusiastic and that has made the project flow in a harmonious and easy way. In addition, they have given me total creative freedom and it has been a luxury to have their trust and support.”

“Social Distancing is a trompe l’oeil intervention that creates an illusion of a deep, gaping crevice on the rigid surface of a cement wall. Made from countless human silhouettes that are trying to escape it, I wanted to represent the wound that this pandemic has left and do it as a tribute to health workers for their respect and solidarity towards the victims. While the image serves as a metaphor for the damage done by the pandemic, it also literally proposes social distancing as a way to fix it. In between the large crowd, I included scenes of reunion, empathy, care, and love, suggesting a door to a better, hopeful future.”

Overcoming is the second piece from the series, which was realized with on-hand help by young oncology patients. Depicting a child recreating Van Gogh’s Wheat Field with Cypresses with his hands, the piece is somewhat a take on a work I created in Norway in 2015, showing a boy recreating Munch’s Scream with his toy cars. In the piece, a child is propped on a wheelchair, able to paint higher than the rest. This is something that we, as a society, could do—take this crisis and use it to propel us forward.

“Caress is the final piece that poetically describes the new dynamics of the relationship between the patients and the health workers imposed by the COVID virus. While physically standing distant and only looking at each other, their shadows are depicting the need and wish to return to physical contact. I also added a sense of serenity and beauty by turning their shadows into a colorful and peaceful pond with water lilies, paying homage to one of my favorite painters, Monet, along the way.” 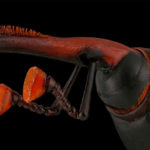 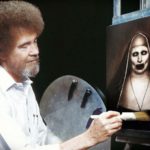