Pint-sized Coral DeGraves has modelled as over 60 characters from some of the most iconic horror films with the help of her mum, Cheyenne. The schoolgirl became obsessed with horror films when she was just two and Cheyenne was surprised to find she’d prefer Chucky to Cinderella.

Office manager Cheyenne said: “Coral has never really taken to princesses and other things in that realm. She doesn’t necessarily turn her nose up to princesses or fairy tales, she’s just never shown a distinct interest. While she loves all things horror and paranormal, she is just as much your regular animal loving, adventure seeking, girl scout.

When Coral was about two years old, she became drawn to Chucky so for fun, I made her a little Good Gal’s costume. She wound up later asking to wear that same costume to a horror convention a few months later. Being so young seeing and meeting these actors and artists who make and portray these characters took the fear out of the images and movies for her. From that moment any fear was replaced with genuine fascination. She wanted to watch all of the scary movies and she loves watching anything that shows how the monsters and creatures are created.”

The pair regularly attend horror conventions together sporting homemade outfits and Cheyenne insists that despite her age, the youngster is fascinated rather than scared.

Coral, who lives in Maryland, has been pictured as the bride of Frankenstein, the joker, a gory tooth fairy, Pennywise and a creepy Tinkerbell. Coral’s favourite film is IT but her parents make sure they preapprove any horror films before she watches them herself and Coral watches short clips to help perfect her interpretation of the characters. 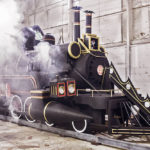 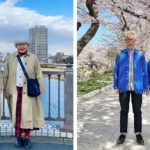