Dusky-pink lime mortar has given new life to a winery in the south of Portugal: Lisbon-based practice Extrastudio has transformed the space into a family home with a black-bottomed swimming pool.

The winery in Azeitão was originally built by the grandparents of the client: and Extrastudio were asked to reimagine the space in a way that honored the building’s viticultural history. Extending upon the original structure, lime mortar has been used to grant overall cohesion to the space: “A natural red pigment was added to the mortar, to reinforce the building’s presence, allowing the house to age gradually and changing its tonality, without ever requiring a coat of paint,” explain Extrastudio. The house also changes color depending on rain and humidity. Inside, mirrored walls and skylights have been installed to maximize brightness without losing privacy. The light from the skylights flood both the upper and lower levels, thanks to a system of light wells that cut through the first level. Outside, a circular deck has been created from the wooden roofing of the original winery, and an orchard full of citrus trees has been planted at the back of the property, where previously vines grew. 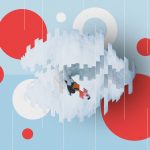 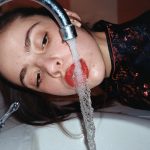