Aaaaagh! Monsters! They’re in our phones! And they’re trying to get out! Aaaaagh! But don’t panic just yet because they’re not real monsters—they’re ‘Phone Buddies!’ Incredibly colorful and imaginative illustrations of fantastical beings by artist Andrew Rae who drew them on photographs taken by his friend.

He wanted to present cellphones as portals to other worlds, as bridges between our world and the digital world. It’s also a commentary about the amount of time we spend looking at our phone screens, completely zoning out real life in favor of a pixelated version of reality.

“I try to have a walk every morning to counter my sedentary lifestyle and it’s hard not to bump into all the people immersed in their phones. I started picturing the phones as if they’re little pets or creatures and people are tickling their bellies to keep them happy,” Rae told Bored Panda.

“I mentioned this to my friend Ruskin one day when we were out with our kids and he liked the idea and we thought it could make a nice collaboration, he’d been doing a lot of street photography, so not long after we talked he sent over a selection of photographs.”

The illustrator continued about how he and his photographer friend Ruskin Kyle, who also lives and works in London, came up with the project: “After our initial discussion he sent the pictures over but at first I couldn’t get the idea to work and was worried I’d wasted his time, the phones were too small in shot and I couldn’t get it to look like the people were holding the little creatures.”

“So I sat on the project for a while until I was listening to Joe Rogan interviewing Edward Snowden and the idea of the NSA monitoring us through our mobile phones made me see the project in a new light. Instead of replacing the phones I’d draw objects or creatures coming out of the phones looking back at us and the different styles of the photograph and the drawing would make sense together as the phone screen is like a portal where the real world and the digital world meet.” 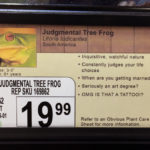 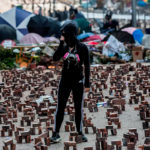