Alicia Vikander has some pretty big shoes to fill as she embodies Lara Croft in Warner Brother’s new Tomb Raider.

The character, formerly played by Angelina Jolie, is not only newly cast but seems to have undergone a major muscle makeover. On Wednesday, new promo photos were released for the upcoming addition to the Tomb Raider franchise—premiering on March 16— and Vikander looked seriously ripped. 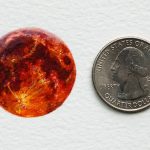