As the time passes we get to keep the fond memories of the past, and if enough time passes, we even start idolizing those memories. That would be my explanation of why the photo series of vintage Paris by Julien Knez is so satisfying to watch.

The editors of Parigramme have contacted Julien after his juxtaposed photographs of Paris’ liberation after World War II, of old combat sites photographed in the present setting. A project that has sparked a similar project of Parisian history from 1871 to the famous student protests in 1968.

Knez was given access to the Parigramme photo archives where he searched for the most iconic photos which reflect the old days perfectly. He took a bunch of those and then scouted for the locations where they were taken.

Of course, it wasn’t as easy at it sounds, as he stumbled into some unforeseen problems like weather, street lights, traffic and renovations the city has undergone. But despite all that he did pull it off and the final shots look like portals to the past in an otherwise mundane everyday setting. 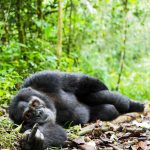