The concrete roof of this single level home is topped with turf, causing it to blend seamlessly with the surrounding landscape. Built into the highest point of the plot, from “The house becomes a continuation of the surrounding topography.”the road the home is barely visible. “We seek an architecture that has the least impact possible on the environment,” architect Marcio Kogan explained in a recent interview. “The house becomes a continuation of the surrounding topography.” The roof is undoubtedly the centerpiece of the home: the architects calling it the ‘“fifth facade of the building.” The green mimics the surrounding wall, whilst contributing to the thermal comfort of the home. Constructed without major supporting beams, the roof appears to almost hover above house itself. 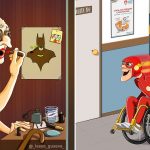 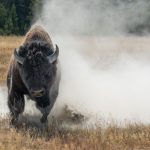