Referred to colloquially as the Pearl of Central Asia, the country — though naturally spectacular, and historically intriguing — exists on the periphery of global consciousness. Verdier sought to document the contemporary climate of Kyrgyzstan through his series, ‘A Shaded Path’, in his own words he explains his project: “Four months in Kyrgyzstan, portraying this country…with a large format camera, through faces and landscapes. This work highlights the generational disparities between those nostalgic for an abolished USSR order and modern westernized youths born after the fall.” While traveling, Verdier witnessed this generational divide and photographed both sides. Subsequently, ‘A Shaded Path’ feels reflective of both transition and stasis: “Relics of a past era mingle with the faces of a population frozen in transition.” 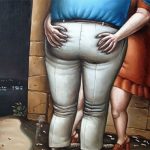