Wonmin Park’s furniture designs are quietly restrained and patiently considered — much like the South Korean designer himself. His concept driven practice argues that the aesthetic value of an object be considered not as equally important to its function, but as a function in and of itself.

Born in Seoul, Wonmin has spent nearly half of his life in Europe — moving to Eindhoven after a short stint studying architecture in Korea. The designer came to prominence through ‘Hazy Cities’, a soft conceptual series that he began when he left the Design Academy in Eindhoven. Cast from resin in muted colors that mimic plays of light and ghostly apparitions, this series stands in stark contrast to his latest work, ‘Plain Cuts’ made from aluminum. At his studio in Paris, we spoke to Wonmin about the European art scene, the importance of materiality in his work, and how an introspective art practice finds balance in the cultural climate of Paris.

You were born in Seoul, studied in Eindhoven, and have now set up your studio in Paris. How have these places shaped your work and practice?

I lived in Seoul until I was 25, so culturally I am fully Korean. Then I moved to the Netherlands to study at the Design Academy in Eindhoven, so I wasn’t that young I suppose… I had studied architecture before design, but I didn’t finish that degree! Eindhoven is a small place, and people are always surprised “I didn’t know what I would be, but I decided to start making my own work anyway.”that I lived there for so long, many people ask, ‘How could you live in Eindhoven for nine years?’, but at that time I was focused purely on design. The school there was quite tough, they had a four-year curriculum, but I was there for five and a half years. I failed a little. I guess my goal at that time wasn’t graduating, I was nervous to leave the school. I used my first year after graduating to work out what I really wanted to do in Europe, and I chose to stay instead of returning to Korea where I would have ended up working for some kind of company. So I don’t know, I didn’t want to take that option. I didn’t know what I would be, but I decided to start making my own work anyway. So I did some work and with the proceeds bought materials and other bits necessary to continue my studio work, and after that, I made ‘Hazy Cities’ from resin. Luckily I had a chance to exhibit in Lausanne, and at Salon di Mobile in 2013. That was quite a remarkable step for me, I had a lot of success with the media afterward, which meant that I was able to continue my work.

And it was after this that you moved to Paris?

So I lived in the Netherlands for nine years in total, and then I decided to move to Paris. Eindhoven is a good place to start a career, I really appreciate the city — because it’s where I’ve grown and I’ve learned — but while I was living in the Netherlands, I always had this desire for something else. Eindhoven is a great city, but culturally it is quite dry. In the beginning, I thought about moving to Amsterdam or Rotterdam, but then I realized I wanted to change the atmosphere completely. My other options were London or New York — mainly because my brother and my cousin live in the US. But in the end, I wanted to stay in Europe, and yes London is a nice city — culturally very active, but historically Paris has been a meaningful place for design. In the end, everything came together and I decided to move to Paris.

“…while I was living in the Netherlands, I always had this desire for something else.”

What is the premise behind your work?

So ‘Hazy Cities’ is my resin work, and it was made with this idea of tension between substantiality and insubstantiality. The concept came first, and then I looked for the right material to express it through. At that time, when I looked at my environment I found I was falling in love with these ghostly fade-outs and a certain quality of light. I had to ask myself, why is this beautiful to me? I wanted to bring that quality into my work. But I had to work out how I could realize this concept in a practical object — because I am not a fine art artist, so, you know, my work needs to be practical. It needs to have a function. If I am making furniture it needs to be used, otherwise, it’s a sculpture, right?

“And with metal work, I had more freedom, I was able to play with tension and less or more tangible structures.”

I started with the resin work, but I mean, I am still a young designer, and to just use the one material for the rest of your life is boring. I am always interested in new materials, I guess the reason that I continued to do ‘Hazy Cities’ for so long was because it was my early years, and there were a lot of challenges that came in developing the materials. I’m not the first to use this material, but I’m a designer who used this material for furniture, so we had to invest a lot of time and money to get it to this stage. And when I looked back at it, I realized I could move my work to new stages — so that’s why we developed my new collection ‘Plain Cuts’, which is made out of aluminum. I wanted these pieces to be tangible, recognizable and identifiable as my work — but not the same designs made from new materials. Of course, the metal material has influenced to the design and the concept. So for the resin work, I needed form and structure — because it’s not a strong material. And with metal work, I had more freedom, I was able to play with tension and less or more tangible structures.

You have worked extensively with resin and with aluminum; one could call them opposites when considered from the context of your work. What drew you to these materials?

So I was looking at the materials for my new work for quite a long time… in a way, I wanted to use a material that was the opposite of resin because resin is a special material and some people think my designs are special just because of the material. So I wanted to illustrate that aluminum — which is a very normal material — could be used in a valuable and interesting way. At this time, I used a sheet of aluminum, you know, a normal construction material, and then I just cut it and reconstructed it in a new way. From this work I conjured a confidence with all other materials as well. In the restaurant, chefs are using all kinds of the same ingredients, but they all make their own paste based on those same ingredients. I believe that the best chef is always using the quality of their own ingredients. For me material is like this, you should use the essential character of the material in an honest way. That is my design objective.

“I wanted to illustrate that aluminum — which is a very normal material — could be used in a valuable and interesting way.”

How much does the function of an object impact your design?

For me still, concept and aesthetics come first — because in our time there is much more functional and practical furniture than there are aesthetic objects. I mean, when you go to IKEA you can buy practical objects or furniture at cheap prices. For me, the aesthetic of the furniture itself is a function. People are always changing their furniture, and the reason they’re changing it or throwing it away is because they don’t want to have that aesthetic in the house. My work creates atmosphere and is aesthetically interesting. This, I guess, is its function.

“Through my work I am continuously developing an identity and philosophy that are uniquely my own.”When creating do you look to other artists and designers for direction — or is your work more introspective?

I do both. As I said earlier, it’s about communicating with the spirit of your art. I’m not only looking at other artists and designers work and then just following it, but I do need to know what is going on and what other designers are doing and what is happening in the various movements… To make unique work it is necessary to see other peoples work. Otherwise, you don’t know if it’s unique. It’s equally important to have some introspect, you know, creating work is also kind of a way of looking at myself. So through my work I am continuously developing an identity and philosophy that are uniquely my own. 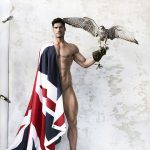