In nearly 60 days, Barack Obama will no longer be the President of the United States, but he’s left his legacy in many more ways than one—and much of it is chronicled through a plethora of photographs. Official White House photographer Pete Souza has been with President Obama since the beginning of his administration in 2008, and during the two terms, he estimates he will have taken nearly two million pictures.

Many of these photos have made their way into the media, and thanks to Obama’s charisma and playfulness, these images are now beloved icons of his time in office. His ability to read a room—be serious when it counts, but have a little fun now and then—is reflected in Souza’s work. Describing the President, Souza explained to NBC News, “He is not much different than what you see in public. He’s a little more open and funny and less guarded, but he’s still the same person that you see in public and in my photographs.”

There are over 6,500 photos of Obama’s administration available to view on the White House’s official Flickr account—from big, history-making moments to the smaller, everyday instances that showcase the nuances of America’s highest office. 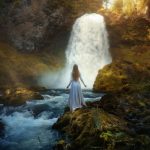