For just $150 a night, you can make yourself at home in the beautiful Cooke House, a lakeside abode in Virginia Beach that happens to be an iconic Frank Lloyd Wright creation. Nestled in nature, the 3,000-square-foot house perfectly demonstrates Wright’s signature style and modern approach to architecture.

Wright was a prolific architect of the 20th Century, known for his “prairie style”—an architectural aesthetic defined by linear forms, open interiors, and a focus on incorporating nature in his designs—and praised as the pioneer of organic architecture. With its hemicycle shape, striking angles, and secluded surroundings, The Cooke House embodies these unique architectural interests.

The renowned residence is named for Andrew and Maude Cooke, a couple who commissioned Wright to build “the beautiful house [they] have dreamed of for so long” (but that was also fit for parties, of course) in 1951. Construction commenced in 1959—a mere two weeks before the architect’s death—and it was completed the following year. In 1983, the home was restored, and today, under its current owners (and potentially your next Airbnb host and hostess) Daniel and Jane Duhl, it appears remarkably similar to when Wright designed it.

The dwelling features site-specific furniture designed by the architect, as well as beautiful skylights and vaulted ceilings. The main house includes three bedrooms, two bathrooms, a kitchen, exercise room, spa, sauna, and pretty patio that overlooks Crystal Lake. Lucky lodgers stay in the attached staff suite—a private cottage made up of a bedroom and bathroom—but are given a complimentary tour of the house by Mr. and Mrs. Duhl upon arrival. However, the home is currently on the market for a cool $2,750,000, so any architecturally-minded Airbnb hopefuls better act fast!

All images via Frank Lloyd Wright Beach House and Airbnb. 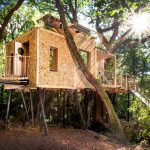 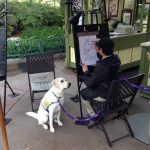