Call it magic, call it science…whatever you call the comfort that a dog can bring to a human, it’s real. The ability dogs have to bring peace, security, and love to humans is what makes them able to be professional service animals. One child in particular made an unlikely and incredible bond with a dog last week that brought tears to his mother’s eyes.

Shanna Niehaus is the mother of Kai, a 5-year-old boy who severely suffers from autism. For several years, she has worked tirelessly to help him find children his age to connect with. Her biggest desire is to see her boy find a friend who loves him as truly and kindly as she does. Niehaus had heard of an organization in Ohio called 4 Paws For Ability, which specializes in “enrich[ing] the lives of children with disabilities by the training and placement of quality, task trained service dogs to provide increased independence for the children and assistance to their families.” Last Tuesday, Kai met his autism assistance dog, Tornado—his first friend—for the first time.

In a teary, heartfelt Facebook post, Niehaus shared the many emotions that rushed through her as she saw her son cuddle with another being in a way she had never seen before. “This picture captures the face of a mother who saw her child, who she can’t hug, wash, dress, snuggle and touch freely lay on his new Service dog of his own free will, with a purposeful unspoken attachment. This is the face of a mom who has seen her son experience countless failed social interactions on the playground in an attempt to have a friend. Any friend. Any kind of connection. She has sat with her son while he has cried at night for months because he has no consistent connections outside of the family no matter how hard he tries and no matter what he works hard on in his Autism therapies. It doesn’t transfer to the natural occurring world for him. And now she is sitting behind her son silently watching this moment, with the air sucked from her lungs, and no words to say.”

The Niehaus family lives in Japan and had to travel across the globe to meet Tornado. But for Shanna, it was all worthwhile to see her child happy and at peace with himself for once in his life. “It’s worth every fight for services for my son, every diagnosis, every new provider, every dollar spent, every paper filled out, every school meeting, every shed tear, every step forward, every step back, and every wonder of the unknown future,” she wrote. “Somehow because of this – because of Tornado – I know everything will be okay.”

The happy union of Kai and Tornado and their first moments together were captured on video:

All images via 4 Paws For Ability. 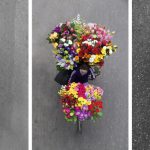