To many lovey-dovey couples, a Disneyland proposal is a picture-perfect way to pop the question. Ty Junemann and Ashley Idema made all of their Disney dreams come true when they got engaged in front of Sleeping Beauty’s Castle in the “Happiest Place on Earth.” Following such a magical marriage proposal, the couple aptly opted for a Disney-themed wedding, complete with a collection of one-of-a-kind centerpieces created by the blushing bride.

Each table at the reception was adorned with DIY décor inspired by a different Disney film, from Snow White to Frozen. While some of the centerpieces’ influences are obvious—like the well-known characters included in the Beauty and the Beast display—others require a bit more in-depth Disney knowledge to discern (if you’ve never seen The Little Mermaid, for instance, a kitchen-utensil-candelabra may leave you scratching your head). The entire enchanting affair was shot by photographer Dawn Browne, who beautifully captured every detail of Idema’s homemade creations to produce photos fit for a fairytale.

In addition to the movie-inspired centerpieces, Julemann and Idema incorporated other Disney details into their reception’s décor. Each magical touch—from the miniature Sleeping Beauty’s Castle on their own table to their adorable Up-inspired cake topper—worked together to perfectly capture the couple’s “happily ever after.”

All images via Degrees North Images. 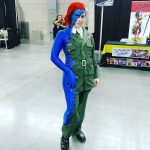