Words cannot fully encapsulate the immersive visual feast that is the work of Berlin-based collage artist, Clare Börsch. Densely populated with an expansive variety of flora and fauna from every corner of the earth, her installations envelop the viewer in an otherworldly ecosphere textured by intense color and stark contrasts. Despite the fact that they’re made of paper, the lush jungles that she creates seem almost real.

With each painstakingly hand-cut image—either photographed, hand painted, or sourced from online archives of early naturalist illustrations—Börsch constructs striking compositions that often display surprising combinations. “Having grown up all over the world, my life has been a collage of sorts,” the artist says, revealing the origin of these unique juxtapositions. “For me, it makes sense to collage a Brazilian butterfly next to a North American flower. In my mind, they are intrinsically connected.”

Still, there is more to Börsch’s installation art than its vibrant aesthetic appeal. Though tantalizingly beautiful, her pieces are also pervaded by themes of death, decay, and fragility. The issues of climate change and the dwindling biodiversity of our planet are both topics that she now seeks to address through her work, though it was unintentional at first.

Reflecting on this particular aspect of her work, she observes: “This came into focus for me when I made a series of collages and then later realized that many of the species in the vintage illustrations had already gone extinct. Humanity has wiped out 68% of all our planet’s biodiversity since 1970, so working with vintage illustrations can be very heartbreaking as much of the diversity in these gorgeous old naturalist prints has been wiped out by human activity.”

The full impact of Börsch’s artistic message has culminated in the concept of her latest installation, titled Biodiversity. Scroll down to see more amazing images of her work and hear more about her message.

Berlin-based collage artist Clare Börsch densely populates her installations with a vast variety of flora and fauna from virtually every corner of the earth.

Each image is either photographed, hand painted, or sourced from public archives, and then painstakingly hand-cut and assembled into immersive masterpieces.

She also seeks to comment on current issues—such as climate change and the planet’s dwindling biodiversity—through her artwork.

Hear more about the inspiring message behind her latest installation, titled Biodiversity. 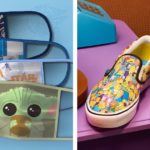 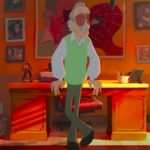