Kosovar artist Petrit Halilaj has created a fantastical, yet deeply personal, installation for his first solo exhibition at the Reina Sofía’s Palacio de Cristal in Madrid. Inspired by the elaborate courtship rituals of bowerbirds, who are known for decorating structures to attract a mate,  he’s strung up enormous flowers inside the glass conservatory.

Halilaj’s work often tackles themes of home, nation, love, and cultural identity. The show, titled To a raven and the hurricanes which bring back smells of humans in love from unknown places, is no different. This time, the artist uses nature to construct a highly personal narrative. The large forsythia, palm seeds, cherry blossom, poppy, carnation, and lily flowers that dangle from the roof were constructed from steel and canvas in collaboration with Halilaj’s life partner, Álvaro Urbano.

“I wanted to conceive Palacio de Cristal as a place for the celebration of love,” Halilaj declared. And by publicly demonstrating their love, the couple is making a big statement about acceptance, particularly when neither the artist’s family nor Kosovar society fully embraces them. This call for acceptance also extends to the artist’s own nation, as Kosovo is not a fully recognized state. In fact, Spain does not recognize Kosovo and is one of its biggest opponents in entering the European Union.

As a secondary concept, the nesting space that Halilaj has created within the Palacio de Cristal is tied to its environment. It cannot be separated from its surroundings and together they function as a whole. By opening windows and setting up feeding areas for birds to enter the space, he blends indoors and outdoors seamlessly. And by inviting viewers to wander among the enormous structures, he asks them to consider their own place in nature.

Halilaj’s exhibition is the first to open at the Reina Sofía since its COVID-19 closure. In fact, the pandemic disrupted the installation of the show. But now, after opening in July, the world will have until February 28, 2021, to take in the work and contemplate this magical space.

The exhibition, which is on view until February 2021, is a commentary on love, identity, and acceptance.

Artist Uses 10,000 Pigeon Feathers in Striking Installation That Cascades From a Bookcase 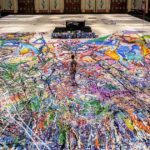 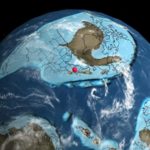