Nearly 100 years before Leonardo da Vinci (c. 1452-1519) created the Mona Lisa, another painter was setting the standard for realistic oil portraiture. Born in what is now Belgium, artist Jan van Eyck (c. 1390-1441) was an early master of the oil medium and used it to create meticulously detailed compositions.

His most prominent work, The Arnolfini Portrait, remains an icon of the Northern Renaissance—encapsulating many of the aesthetic ideals and technical innovations of the time period. However, there is more to the masterpiece than its rich color palette. Hidden in the design are layers of iconography which help to tell the story of the couple depicted.

Here, we will explore how Van Eyck’s masterful achievement of painting came to be and look at some of its well-placed symbolism.

At the same time the Italian Renaissance revived classical aesthetics in 15th century Italy, the Northern Renaissance swept through artists north of the Alps—particularly, in the Netherlands, Belgium, Germany, France, and England. Like its southern counterpart, this period also emphasized realism but with a focus on painting and printmaking.

Flemish artist Jan van Eyck is considered to be one of the most notable painters of the Northern Renaissance and produced a number of highly religious works. Although oil painting had existed for some time, Van Eyck is credited with being the first to utilize its potential for color and realism.

The Ghent Altarpiece is considered to be his first masterpiece in the medium, which he and his brother Hubert (who was also an artist) painted over a ten-year period. It displays a rejection of the idealized Medieval style in favor of more realistic art that was rooted in almost a scientific observation of nature.

In 1434, about a year after the altarpiece’s completion, Van Eyck began working on The Arnolfini Portrait, also called The Arnolfini Wedding. It depicts a wealthy merchant—presumed to be Giovanni di Nicolau di Arnolfini—and his wife in a lavishly decorated room which showcases their opulent wealth.

At first glance, The Arnolfini Portrait stands out for the intensity of its color palette. On the left side of the piece, the man dons a heavy blue-black coat with fur trim, and on the right, his wife wears an emerald overdress with textured sleeves. Each article of clothing and piece of jewelry seems to glow on the canvas.

Van Eyck achieved this depth of color by using the wet-on-wet technique, in which he added layers of wet paint before the previous layers have dried. This allowed him to expertly blend colors and create a sense of three-dimensionality on the canvas. Additionally, the artist applied layers of translucent glazes to the painting to accentuate not only the realism of the figures but also the luxury of the home.

Iconography in the Painting

Although the identity of the subjects is not certain, the woman’s headdress suggests that they are indeed a married couple, as only unmarried women wore their hair down in 15th century Flanders. However, contrary to what many viewers think, the wife is not pregnant but is only holding her voluminous overdress at her chest, which was customary for the time.

The exact meaning behind the couple’s display of joining hands is still debated among art historians. While some suggest that it is symbolic of a marriage contract, others believe it is a gesture of consent for the wife to act on behalf of the husband’s business dealings.

Most of the objects on display in the room—like the chandelier, dyed fabrics, and imported foods—are there to subtly signify the couple’s immense wealth. On the back wall of the room is a convex mirror which shows a reflection of two people, one of whom is very likely Van Eyck. The mirror itself is thought to suggest the eye of God observing the scene.

Above the mirror is a fanciful Latin inscription that says “Jan van Eyck was here 1434.” This reaffirms the artist’s presence in his own work.

Many of Van Eyck’s color choices are believed to be indicative of hidden meanings. The woman’s green dress, for instance, could possibly symbolize hope, most likely the hope of having a child. Likewise, the red curtains and bedsheets in the background could imply intimacy between the married couple. Between them is a small dog which is commonly included in paintings as a symbol for fidelity.

Altogether, the iconography of The Arnolfini Portrait weaves a picture of an affluent merchant couple basking in the riches of their success. At the same time, it also displays a mastery of color, space, and storytelling by Van Eyck that was revolutionary for the time.

Immerse Yourself in the Long-Running Tradition of Bathers in Art 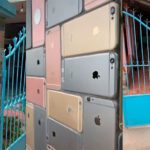 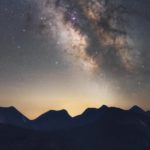