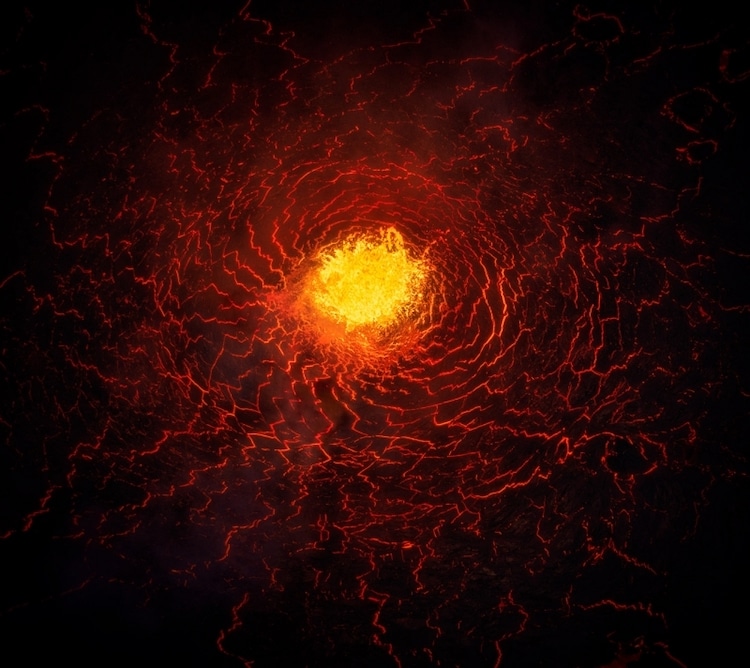 “Big Bang” by Armand Sarlangue. Photo of the Year.
“In the picture, a secondary fissure happening a few hundred meters from the main crater of Fagradalsfjall volcano during the very last eruptive phase. It was captured as a storm was hitting west Iceland, with rain and strong winds. Due to the difficult conditions, a drone capture like this is unique.”

Over the past decade, drones have become an increasingly popular tool for both professional and amateur photographers. By giving a unique aerial perspective, drones allow photographers to enhance their creativity and take to the skies with ease. And, thanks to the Drone Photo Awards, it’s easier than ever to enjoy the creative magic that happens when a good photographer is paired with this incredible technology.

For the 2022 contest, 2,624 photographers from 116 countries submitted work. But, in the end, it was French photographer Armand Sarlangue who saw his entry named Photo of the Year. The mysterious photo, which shows a glowing orb against a dark background, looks like it comes from outer space, but it is set right here on Earth. Titled Big Bang, Sarlangue’s award-winning photo portrays a secondary fissure happening a short distance from the main crater of Iceland’s Fagradalsfjall volcano.

In addition to Photo of the Year, awards were handed out in eight photo and three video categories. New views of architecture, interesting looks at wildlife, and glimpses into different cultures are just some of the themes covered by the winners. All of the winners and runner-ups will see their work included in a special exhibit at the Siena Awards Festival in Italy, which will be held from October 1 until November 20.

Check out all of the winning photographs and selected finalists from all of the categories below.

Here are the winners of the 2022 Drone Photo Awards.

“Abandoned Weather Station” by Dmitry Kokh. 1st Classified, Series.
“On a sailing trip to Chukotka and Wrangel Island, the photographer covered more than 1200 miles along the coast. One day, to shelter himself from the incoming storm, he approached a small island, Kolyuchin, a former meteorological station in the days of the Soviet Union. After seeing the strange movements in the windows of an abandoned village, he caught a glimpse of the faces of some polar bears through his binoculars! There were about twenty specimens, mostly males, who were wandering among the abandoned houses while the females remained on the sidelines with their puppies. Since it was too dangerous to land on the island, he decided to use a drone equipped with low-noise propellers to photograph the animals without disturbing them.”

“Sleeping on a Boat” by Anindita Roy. 1st Classified, People.
“Dhaka is located on the bank of the famous Buriganga river. Sadarghat river port of Dhaka is the busiest port in Bangladesh, with services to most of the districts in the country. People from both sides of the Buriganga river cross it using small boats. The boat men working on them, usually sleep at night on the boats themselves.”

“Collecting Dry Red Chillies” by Md Tanveer Hassan Rohan. Highly Commended, People.
“Women sorting dry red chilies in a red chili pepper dry factory to preserve them. They get nearly $2 (160 BDT) for 10 hours of work, and in some places, they get paid even less. Bogura’s chilies are famous around the country.”

For this year’s contest, 2,624 photographers from 116 countries submitted work.

“The Unicorn” by Shuai Wu. Commended, Abstract.
“Overlooking the unicorn hollow dome from the air. From above, the triangular shapes and the curvy lines create a geometrical and fascinating pattern. The viewer’s eye gets lost in the movement of the image, as it was an optical illusion. The picture was taken at Unicorn Island, Chengdu, Sichuan China.”

“Salt Farm Workers Harvesting” by Saurabh Sirohiya. 1st Classified, Abstract.
“Some laborers at work in a salt pan where they move the salt to form circular lines allowing a slow evaporation under the hot sun. At the end of the day the salt will be collected in baskets: it’s a really hard job!”

“Solidarity” by Mehdi Mohebipour. 1st Classified, Wildlife.
“Flamingos sleep together at night for greater security and stay close together during the day, thus protecting each other. In this crowd of bodies the colorful nuances of the plumage and the reflections of the light stand out.”

“Falling Skiers” by Daniel Koszela. 1st Classified, Sport.
“The photo taken in March 2022 shows the competitors of the annual ski event: Bieg Piastów held in Szklarska Poręba, at its 46th edition. Skiers whiz in their colorful clothing along the track surrounded by snow-covered trees.”

“After Sand Storm” by Yura Borschev. Runner Up, Urban.
“In the picture, a basketball court after a sand storm in the United Arab Emirates: the sand is partially covering the field, letting the viewer get a glimpse of its original shapes and colors. It is one of the greatest finds in the author’s sport courts collection shot in 2021.”

All of the winners will see their work displayed in a special exhibition in Siena, Italy.

“Eye” by Matteo Originale. Commended, Wedding.
“The photographer tried to create an unusual image with the drone that made the water move around the bride and groom. He attempted to make a normal shot special: the result is beautiful.”

“Learning Life” by Florian Ledoux. Runner Up, Wildlife.
“A young polar bear, a yearling, is playing in the water testing the fresh ice and jumping back and forth in the water with his sibling, while their mother is resting nearby. This image is the result of 5 months in the field, living with and near the bears in a remote camp on the east coast of Svalbard.”

“Like a Painted Picture” by Krzysztof Krawczyk. 1st Classified, Wedding.
“The effect of the sun on the water, a felled tree and a brave bride lying on it: a magnificent picture drawn by nature. The surface of the water looks like a starry night sky, while the bride looks seems a dreamy princess.”

“Aftermath of La Palma’s Volcano Eruption” by Enrico Pescantini. Runner Up, Nature.
“The impressive eruption of volcano Cumbre Vieja hit the island of La Palma at the end of 2021. For 3 months the lava river destroyed over 3000 buildings, 90 kilometers of roads and endless hectares of banana plantations, leaving more than 2000 people homeless. The landscape changed completely.”

The winning images show the creative possibilities of drone photography.

“9 Unique Shaped Buildings” by Dimitar Karanikolov. Runner Up, Series.
“A series of aerial top-down photographs of 9 buildings around the world with unusual shape and rooftops. Dhamma Yazika Pagoda in Bagan, Myanmar.”

“Shadow Basketball II” by Kateryna Polishchuk. Commended, Sport.
“A shot in Urban park in Kharkiv, the best place to practice sports—or take drone pictures like this one. The light blue ball is standing perfectly on the centre of the orange crescent-shaped part of the field. The two colors create a beautiful contrast in the picture.”

“Meeting” by David Rouge. 1st Classified, Nature.
“This picture is the result of a dream come true: the meeting of the desert and the ocean. As the drone climbed higher, the photographer noticed a particular atmosphere, where the light highlighted the delicious shapes of these dunes flowing into the South Atlantic Ocean.”

Stunning Drone Photos Capture the Hidden Patterns of Our World

Get a New Perspective on Prague With These Spectacular Drone Photos

Cinematic Drone Photos Capture Stunning Views of the World from Above