Things aren’t always what they appear to be. Paint and a little creativity can disguise a variety of accidents and misfortunes. For example, this beautiful mountainous landscape on the side of a car has quite the hidden history.

The owner of this vehicle was traveling through the Altai region of Russia when his car was hit by a larger truck. No one was hurt, but the damages included a large dent on the driver’s door. In Russia, there is no mandatory car insurance so all damages must be fixed out of pocket. The truck driver did pay for the damages he caused; however, instead of taking his car into the shop for a tune-up, the silver car driver took the cash and his dented car for a ride through the mountains. He needed some inspiration.

With a black permanent marker bought at the local general store, the man got to work creating a detailed map of the Altai region upon his car door. Some of the more damaged parts lent themselves perfectly to becoming shady sides of the mountains, while many surface scratches disappeared under the drawing. Along with a beautiful scene of the mountains and surrounding lake, the man also pinpointed neighboring cities and numbered roads.

Although the man has said the decorated door is only a temporary fix until he can fully replace it, his inspiring story reminds us that when life gives you a scratch, turn it into a sketch.

Here’s some of the inspiration behind the artwork:

And the spectacular results: 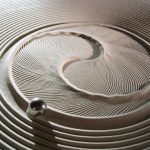