A spectacular surprise awaits visitors to Iran’s Shah Cheragh. This funerary monument and mosque, located in Shiraz, has been a treasured pilgrimage monument since the 14th century. Translating to “King of the Light,” Shah Cheragh houses the tombs of Ahmad and Muhammad, sons of the the seventh Shiite Imam Musa al-Kadhim and brothers of the eighth Shiite Imam Ali al-Ridha.

The space takes its name from the tale of its discovery by a man who was drawn to a light emanating from a grave. After excavating the grave, a body wearing armor—thought to be that of Ahmad—was found and a tomb was subsequently erected during the 1130s. The space really took shape hundreds of years later in the 14th century when Queen Tash Khātūn erected a mosque and theological school on the site, in addition to ordering repairs and the decoration of the tomb with hundreds of thousands of pieces of glittering glass and colored tile. Iran is known for its spectacular mosque interiors, but the tomb’s opulent reflection of light helps make it the most important pilgrimage center in Shiraz.

The decoration seems fitting for a space founded by and named after light, with the glass tiles casting beams of colorful rays across the space. The complex itself has seen numerous changes through the centuries, with half of the building collapsing after an earthquake in 1588, and the entire dome removed and replaced with a lighter iron structure in 1958. Yet, for all the changes, the complex remains a shining gem and incredible example of Islamic architecture.

You’d never imagine that such a spectacular sight is inside this modest structure: 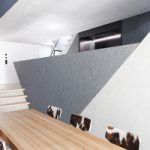