Colorado-based landscape photographer Eric Gross has seen a lot of incredible scenery in North America, but nothing prepared him for what he found during his first visit to a lake in his own backyard. Tucked between snow-covered Rocky Mountains, this quiet respite revealed something unexpected. As he walked along the shoreline, he became fixated on icy waves that reflected the landscape on their sleek surface.

This observation instantly inspired a wave of photographs, as Gross threw his creative energy into capturing the magnificent scene. “Unplanned and unprepared, the only way I could shoot at truly ground level was to lie on the wavy ice,” Gross tells My Modern Met, “and use any soft materials available (gloves, hat) to support and solidify the camera for multiple shots with varying focal planes that enable focus stacking to create an image with sharp focus from six inches away to infinity. With only minor practice in this skill, it was a challenge whose results are visually stunning.”

It was a scene that sparked so much creative energy that Gross returned to the lake time and time again, always seeking news ways to immortalize the frozen waves. As the snow continued to melt, Gross was able to capture one last image to remember his discovery. The waves are still and smooth, like a piece of glass. Frozen in time, they gain a sculptural quality that allows us to truly appreciate the natural forms of water.

For Gross, who spends up to 18 months at a time on the road, this discovery is all the more special thanks to the location. It is a reminder that, often, the best treasures are close to home—all we need to do is slow down and look in order to find them.

Photographer Eric Gross became inspired by the icy frozen waves he discovered at a lake in Colorado. 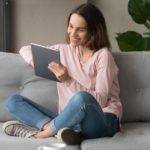 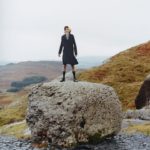