Brazilian photographer Marcio Cabral is known for his underwater panoramas. And now, he can add world record holder to his achievements, as an image he took in 2018 was recently named the world’s largest underwater panorama by Guinness World Records. The photograph is an impressive 826.9 megapixels—breaking his previous record of 495 megapixels—and was taken in Brazil’s Lagoa Misteriosa.

Known for its transparent waters, the Lagoa Misteriosa (“Mysterious Lake”) is located at the bottom of a sinkhole. Found in the city of Jardim, it’s a favorite spot for divers due to its visibility. Though one diver reached a depth of 720 feet, no one has ever reached the bottom of this incredible lake.

For Cabral, Lagoa Misteriosa meets all the requirements for a great panoramic shot—good light, no currents, and not a large amount of aquatic life. To make the photograph happen, he invested over $3,500 in technical equipment. And with a single camera and just a few accessories, he produced an impressive image measuring 47.4 feet wide and 23.7 feet tall. The 360-degree panorama required just 10 minutes of dive time but 30 hours of post-production for Cabral to stitch together the 28 shots used in the final image.

Cabral dove 59 feet deep to take the photograph, making some adjustments to the shoot from his previous image. First, he included a larger area at the center of the lens. He also used a custom ISO ranging from 200 to 800 in order to provide uniform lighting and take in the details of the darker waters. Additionally, Cabral decided to include models in the shoot for context. The model who appears at the bottom in a spherical bubble was located at 65.5 feet underwater while Cabral shot him from 59 feet.

Though this record is impressive, Cabral wants to push himself to keep going. In fact, in 2021 his goal is to return to Lagoa Misteriosa for a new panorama, but this time he wants it to be over one gigabyte. While we’re waiting for that, we’ll have to sit back and enjoy this current world record holder.

This 826.9-megapixel photograph is the world’s largest underwater panorama.

Enjoy a 360-degree view of Marcio Cabral’s panorama of the Lagoa Misteriosa.

A Panoramic Exploration of a Magical Underwater World

12 Incredible 360 Aerial Panoramas of Cities Around the World 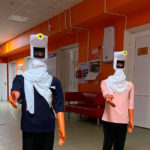 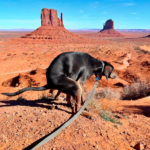