Adventurer Cassandra DePecol is a woman on a mission. While the 27-year-old was raised in Connecticut and now calls California home, she has dedicated the last 15 months to wandering around the world as a “global citizen” and an advocate for peace. She has visited an astounding 181 countries, and is eager to check all 196 off of her list—a feat that would make her the first female, youngest American, and fastest individual to do so. Deemed Expedition 196, this passion project exhibits DePecol’s empowering jet-setting journey.

Though DePecol’s love of travel has been a lifelong affair, her wanderlust took off in 2009, when she and her brother traveled around Europe. What started as a tour of Belgium, the Netherlands, the Czech Republic, Germany, and Switzerland eventually turned into two years of travel across the Middle East, Africa, South America and Asia. With only $2,000 to her name, DePecol supported herself by “sweeping floors, serving tables and planting seeds.” Six years later, on her 25th birthday, she decided she wanted to do it all over again—but this time, she wanted to do it even bigger. With a crinkled map, a kickstarter campaign, and a goal of seeing every country on earth, she set off on Expedition 196.

Since kicking off Expedition 196 on July 24, 2015, she has documented a wealth of invaluable moments—from fulfilling her dream of riding in a cockpit to experiencing the tremendous kindness of a stranger in Cuba—on her Instagram. Given the high costs (nearly $200,000 so far) associated with her travels, DePecol relies on the support of sponsors, and she often uses her Instagram to showcase businesses in exchange for accommodation—a savvy way to globe-trot!

While Expedition 196 supports many of DePecol’s personal goals—to expand her horizons, leave her comfort zone behind, and, of course, experience the myriad cultures the world has to offer—it serves an even larger purpose: to promote peace. Inspired by her undertaking, The International Institute for Peace Through Tourism (IIPT) has named DePecol as one of their Ambassadors for Peace. As a representative, she speaks to audiences (primarily students) around the globe about sustainable practices and beneficial environmental actions.

With only 15 countries and less than 40 days to go, DePecol is in the homestretch of her project. As Expedition 196 comes to a close, be sure to keep up with her through her uplifting Instagram and her travel-inspired Twitter!

All images via Cassandra DePecol. 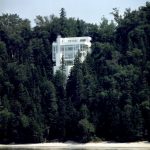