Earlier this year, the Getty Museum challenge took the world by storm. People scoured their homes for materials to recreate some of art history’s best-known paintings. Liza Yukhnyova is one person who decided to participate, and she fell in love with this unique way to honor art while having the chance to express her creativity, too. She became so enthralled with the project that she decided to extend the challenge for an entire year. Every day, Yukhnyova shares a historic painting and her interpretation on her Instagram account that she’s calling “Liza’s museum from home.”

Yukhnyova’s enthusiasm stems from a degree in art history, and this passion is what has kept her going. “At the beginning, I decided to do it daily for 30 days (wanted to check my discipline and the possibilities),” she tells My Modern Met, “but at the end of this period, I couldn’t stop. I am still continuing and now I am on day 144.” Yukhnyova does everything on her own (without the use of Photoshop), from makeup to costumes to lighting (using her table lamp) and shooting the final photos with her phone. “I use very simple things that surround me at home,” she shares, “So I need to be creative.”

The task of reproducing an artwork every day can be daunting, so Yukhnyova is staying organized by recreating paintings from different geographical areas as well as genres. “I made a Middle Eastern gallery, ancient gallery, Red Cross posters, and others,” she explains. “One of my goals is enlightening people when they compare my photos with paintings. I want to highlight great paintings from different cultural traditions and show people that they are much closer to them than it seems. My replicas encourage everyone to look at the paintings in detail, I think it’s important.”

Liza Yukhnyova is participating in the Getty Museum Challenge for a whole year.

“Portrait of a Young Spanish Woman” by Anton Ebert

Each day, she recreates a work of art using objects around her home.

“The Fortune Teller” by Frédéric Bazille

“Pluck Roses As Soon As Possible” by John William Waterhouse

“Portrait Of Lady With A Fan” by Paul Cesar Helleu 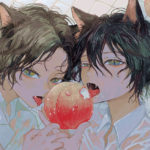 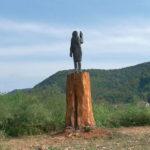