As technology continues to become lighter and faster, innovations have found their way into timeless designs. The bicycle seems like something that’s nearly reached its peak of modernization, but as VELLO demonstrates, it can be pushed further. Founded by Valentin Vodev and Valerie Wolff, they’ve produced the world’s first lightweight bike that folds into thirds and harnesses self-charging electric energy.

Called VELLO BIKE+, the most intriguing feature is its capacity for storing generated power. To do this, you simply ride the bicycle—as it travels, the kinetic energy produced is then converted into electricity and recharges the lithium-ion battery. The BIKE+ can also be plugged into charge like any conventional device.

The boost of electric power is marketed towards urban cyclists. This extra energy will make travel faster and it easier to trek up hill. With a fully charged battery, VELLO says that you’ll have about 20 miles of pedaling assistance.

The bike’s folding mechanism uses a magnetic locking system for easy transport—once compacted, it becomes small enough to fit in a suitcase. “A self-locking magnet allows hands-free folding,” Vodev told Dezeen, “which makes it very different from a typical folding bike with complicated hinges to open.”

VELLO BIKE+ is now available for pre-order through Kickstarter. 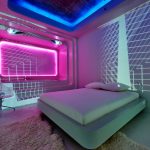