According to Laura Nunez: “Hi there! These are a few of my favorite horror movie characters that I have transformed myself into using the magic of makeup. Just in time for the upcoming spookiest holiday of the season. Thank you for your interest and I hope you will enjoy my work.”

Folklore enhances the hidden Carlotta Salon. In the 1850’s, the restaurant was the home of an affluent Mexican family who hired a maid. The family had a teenage son who fell in love with this maid, much to the distress of his mother, who had much better things planned for her son. Love persisted, however, and his mother came home one afternoon to find the two lovers entwined. Enraged at what she saw, the mother grabbed a pair of scissors from the chest of drawers and stabbed the maid to death. In the process, the mother mistakenly stabbed her son, as he stepped to save his lover. It is said that the ghosts of the young lovers inhabit the Carlotta Salon to this day. The ghosts make their presence known in many ways. Even though modern motion detectors are armed at night, broken glasses and tipped-over chairs are found by morning. There are two upholstered Victorian arm chairs in the room that are rarely used. The cut velvet fabric, however, is worn in the shape of human bodies, one larger than the other, but both small by today’s standards. The Carlotta Salon was named for Marie Charlotte, daughter of the King of Belgium, who was born in 1840 and died in 1927. She was the wife of Maximillian, Archduke of Austria, and the Empress of Mexico from 1864 to 1867. An oil portrait of her holding her small white Maltese dog dominates the room. The two oval portraits of Señor and Señora Maese, the owners of the home, are of the type frequently commissioned by families of that era. The heavy glided brass and cut crystal lamp once lighted the boudoir or famed red-light madam ‘Silver City Millie.” A framed Las Cruces Sun News article of the “Young Lover Ghosts” and a photograph believed to be depicting the presence of the ghost lovers are displayed in the salon. #ghostadventures #ghoststory #doubleeagle #nm #artist #post 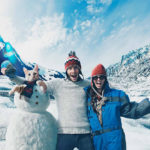 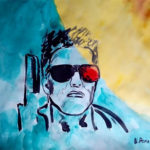