The late artist Ellsworth Kelly’s first and last work of architecture, the Austin Chapel, has been completed by the Blanton Museum of Art in Austin, Texas.

Coinciding with the opening of ‘Form Into Spirit: Ellsworth Kelly’s Austin’ — a new exhibition exploring the iconic artist’s oeuvre — the Blanton Museum unveiled the finished Austin Chapel in February of 2018. Originally designed by American painter and sculptor Kelly, the work was completed by the university art museum after his death. All original design and plan details, such as the need for the building to be “widely accessible”  and “well maintained”, were adhered to by the museum’s curators.

Known for his distinct use of bright color, penchant for totem-shaped sculptures and love of geometric shapes, Kelly designed Austin to be “a site for joy”. The building’s exterior is made up of 2,715-square-feet of white stone with colored glass windows grouped in patterns around the building’s facade. The colored glass mimics stained glass windows found on traditional Catholic churches and creates an interesting dappled light effect on the inside.

The interior features an 18-foot tall totem made of redwood and a set of 14 monochrome marble panels titled, ‘Stations of the Cross’. These pay homage to the 14 images of Jesus on the day of his crucifixion. Despite these obvious religious design references, Kelly wanted the chapel to remain secular and refused to accept funding from a religious church to keep his vision and to produce the chapel “without a religious program.” The Austin Chapel, which sits atop a hill outside of the exhibition can be seen as a culmination of the artist’s work and will remain as a symbol of his legacy.

All images © Ellsworth Kelly Foundation. Courtesy of Blanton Museum of Art, The University of Texas at Austin 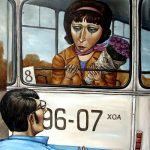 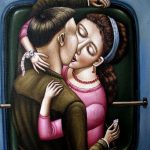