The project was commissioned by the Mexican glass manufacturer Nouvel Studio, a firm that produces unique objects that further glass design. For this particular collaboration, which was revealed at the 2018 Zona Maco art fair in Mexico City, the three designers worked with the artisans at Nouvel Limited on a series of large scale pieces. The aim of the project was to produce objects that provided visual tension. As such, the purity and elegance of the expertly-blown glass has been contrasted against the surfaces of brass, marble, onyx and steel. The untitled project consists of four series; ‘Precarious’, ‘Tomatoes’, ‘Bedrock’ and ‘The Upside Down’. ‘Precarious’ represents exquisite glass sculptures, moulded around steel or brass plates. The ‘Tomatoes’ series is similar to ‘Precarious’; glass pieces are formed around metal plates, but they stand alone. For ‘Bedrock’, locally-sourced stone was incorporated, the series combined the chiseled stone and glass to craft volumes that can be used as vases or containers. ‘The Upside Down’ features two pyramids, one made from stone and one from glass. One of the pieces is placed upside down and the two are fixed together, crafting a dual-functional object which can be used as both a vase and a table. 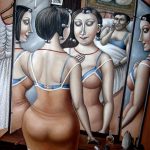 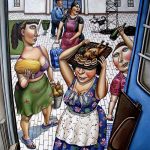