True artists must find a creative outlet no matter what the circumstance—including times of war. Thanks to the creative passion and steady hand of then 21-year old soldier Victor Lundy, we have a breathtaking visual record of World War II, in the form of documentary sketches. For Lundy, “drawing is sort of synonymous with thinking,” which means we are left with an intimate archive of sketches that unfold one soldier’s experience fighting on the front lines. Lundy was studying architecture in New York when, enthralled with the idea of rebuilding a post-war Europe, he enrolled in the Army Special Training Program. By 1944, with D-Day looming, the Army needed reinforcements, which meant that young Lundy would be thrown into the infantry. This shocking turn of events didn’t stunt his creativity, though.

Lundy, who is now 92, recalls his inability to listen during lectures. “I was busy sketching,” he admits. During his time in the infantry, he continued to sketch in his pocket-sized notebooks. The drawings, which were created between May and November 1944—when Lundy was wounded—take us from his initial training in Fort Jackson to the front lines in France. The vivid images show everything from air raids to craps games for cigarettes. A sense of longing for home is a recurring theme in his sketches, which include detailed drawings of his bunk as well as particularly dream-like drawing, titled Home Sweet Home, that shows a soldier lounging on a hammock.

Lundy, who went on to have an acclaimed architecture career, donated his eight sketchbooks to the Library of Congress in 2009. The sketchbooks have all been digitally archived and are now available for viewing online. Lundy’s gift is a precious one, as in this age of continued war and terror it is more important than ever to learn from our past history.

En-route to Europe. Promenade Deck. “And you know, we were far from even thinking of combat. They didn’t tell us. We didn’t know what was going to happen, once we landed. …—you know, the day it happens they tell you.” (September 2, 1944)

France. Cracking the Zeigfried [i.e. Siegfried] line, air raid over Germany Seen on a morning hike. ”…we would see that in Normandy but also when we were in combat, at least two times, and boy, did that cheer us up on the ground.” (September 13, 1944)

All images via the Library of Congress. 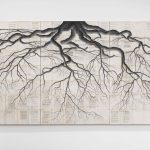