Melting against sky and sea, Alessandra Rossi‘s translucent Untitled Coral is camouflaged against the Australian landscape. This touching sculpture of a girl with downcast eyes was created for the Sculpture by the Sea festival. This well-regarded festival, now in its twentieth year, displays over 100 sculptures along the Australian coastline from Bondi to Tamarama. Rossi, an Italian artist now based in Freemantle, created this stunning artwork that is as aesthetically pleasing as it is significant.

Using 3D printing technology to create the figure from translucent acrylic material, Rossi’s piece drains of its color as it moves upward. At a distance, the sculpture appears smooth, yet upon close inspection the sharp, pixelated edges become clear. From afar, the spectator sees what seems to be a sweet child. Upon closer inspection, the youthful figure appears to transform into an almost menacing robotic figure. Suddenly, her identity has changed, reflecting how identity has become warped due to technology. The pixelated effect betrays this layer of significance, as the artist explains that the piece can we viewed “as a metaphor for the patination and discoloration of emotion engendered by the digital era.”

Rossi’s man-made object also grapples with a man-made problem—climate change. The color draining from the sculpture is a metaphor for coral bleaching, a phenomenon that occurs when water temperatures rise due to climate change. As coral is submerged for an extended period of time in water that is too warm, it becomes stressed and expels the algae that both gives it color and 90% of its energy. Once the algae is expelled, the coral slowly begins to starve, revealing the white skeleton inside, as its flesh turns transparent.

It’s an issue especially important in Australia, where 93% of 3,000 individual reefs have been touched by bleaching, and almost a quarter of coral over the entire Great Barrier Reef has been killed by this bleaching event. Coral bleaching changes the entire ecosystem surrounding the reef—a catastrophe that not only touches the fish who eat coral, but also the birds that eat the fish, and even the humans that rely on the reef for food and income. In this context, Rossi’s work becomes a harsh reminder of how that which disappears, often is not easily replaced. 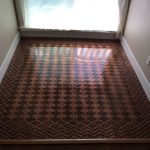 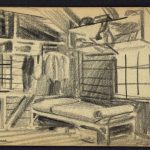