To many people, a penny isn’t worth the time that it takes to pick it up—but not for DIY enthusiast Tonya Tooners. After gathering and sorting a staggering 13,000 pennies ($130), she arranged them into a stunning design on a floor in her home. From afar, you wouldn’t realize they were coins—Tooners’ attention to detail and patterning give them the appearance of tile.

The decor project was a tedious undertaking. “I started by measuring the area [of the room] and finding the center,” Tooners described on Imgur. Afterwards, she drew an axis as a guide and started gluing the coins in a diamond shape—purposely using different-colored pennies (alternating between heads and tails) to provide a striking visual contrast. Once Tooners got to the edge, she created a border—an addition that gives it a distinctly vintage feel. Aside from the pennies, Tooners used 10 bottles of Elmer’s glue, grout, wood filler, and “expensive epoxy” to make her dream a reality.

Laying down all of the pennies was, by far, the hardest part. After the long process was over, Tooners used grout and epoxy to finalize all her work. All told, she revealed to Reddit that the project took her a few months; but with these results, the time spent was worth it.

Here’s how it all started…

After gluing all of the pennies, Tooners applied grout and epoxy to seal the coins. 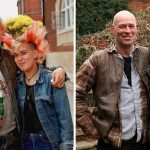