With the help of two unlikely foster parents, 6-week-old Hans knows a thing or two about how to be a goat—and a dog.

Hans and his St. Bernard mom and dad are cared for by Belgium-based student, Isolde—a green thumb who spends much of her time in her countryside garden with all of her farm animals. Isolde fosters a host of other animals at her home as well, including cows and chickens, but the bond between Hans and his furry mentors, Julie and Basiel, is something special. “He learns a lot from the dogs,” Isolde explains to The Dodo. ”They don’t bother the chickens so he doesn’t either. He loves sunbathing with the dogs, he loves going for walks with me and the dogs, but he likes napping with the dogs most.”

The tiny ball of energy was brought to Isolde’s farm when he was just four days old. His mother had passed away and his previous owner couldn’t bottle raise him, so Isolde happily took Hans in. Within no time, the goat was drinking well, playing with others, and he even learned how to use the cats’ litter box. Hans has also become an excellent climber—especially on the St. Bernards, who clean and cuddle the kid as if he was their own puppy.

All images via Isolde. 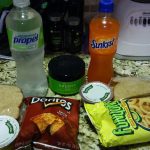 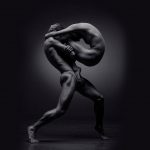