The Wildlife Photographer of the Year 2016 competition recently announced its prestigious winners. Hosted by London’s Natural History Museum, the annual event showcases the beautiful diversity of our world, exploring large and small creatures on the ground, in the sky, and underwater. This year, a judging panel of international experts sifted through nearly 50,000 entries that were submitted by photographers spanning 95 countries.

Photographer Tim Laman took the top prize for his image titled Entwined Lives. It features a critically endangered Bornean orangutan as it ascends high above the Indonesian rain forest. The photo is stunning in its visual depth and conveys an intimate solitude that’s rarely witnessed in the hustle and bustle of everyday life. To capture it, Laman spent three days rope-climbing an almost 100-foot-tall tree to place a series of GoPro cameras that were triggered remotely. One of these devices caught the triumphant composition.

There were 100 winners selected in the 52nd annual Wildlife Photographer of the Year contest. These images will be on display at the Natural History Museum starting October 21, 2016 and will later tour the world. Check out ten of them, with captions from the competition, below.

Above: Wildlife Photographer of the Year 2016: Entwined Lives by Tim Laman / Wildlife Photographer of the Year
“High in the canopy, a young male orang-utan returns to feast on a crop of figs. Tim knew he would be back. After three days of climbing up and down himself, he hid several GoPro cameras in the canopy, triggering them remotely from the forest floor when he saw the orang-utan climbing. He had long visualized this shot, looking down on the orang-utan within its forest home.”

Young Wildlife Photographer of the Year 2016: The Moon and the Crow by Gideon Knight / Wildlife Photographer of the Year
“Catching sight of a crow in the park, Gideon thought the spindly twigs of the sycamore tree ‘made it feel almost supernatural, like something out of a fairy-tale’. But the bird kept moving, making it difficult to keep it silhouetted against the Moon. Finally, just as the light was failing, Gideon turned an ordinary moment into something magical.”

Winner, Impressions: Star Player by Luis Javier Sandoval / Wildlife Photographer of the Year
“As Luis slipped into the water, curious young sea lions came over for a better look. Grabbing a starfish, one of the pups started throwing it to him. ‘I love the way sea lions interact with divers,’ says Luis. Shooting towards the dawn light he created an artistic impression of their playful nature.”

Winner, Details: The Sand Canvas by Rudi Sebastian / Wildlife Photographer of the Year
“Pristine, white sand is blown into vast crescent-shaped dunes along Brazil’s Atlantic coast. During the rainy season, an impermeable layer below the sand causes thousands of lagoons to form. Algae and cyanobacteria tint the water with countless shades of green and blue, while streams carrying sediment from the distant rainforests run across in rusty veins.”

Winner, Birds: Eviction Attempt by Ganesh H Shankar / Wildlife Photographer of the Year
“The parakeets were not impressed. They had returned to their nest to find a Bengal monitor lizard had settled in. The birds immediately set about trying to evict the squatter: biting and hanging off its tail. This went on for two days, giving Ganesh several chances to capture the fast-moving action.”

Winner, Single Image: The Pangolin Pit by Paul Hilton / Wildlife Photographer of the Year
“Nothing prepared Paul for what he saw, or smelled. Some 4,000 defrosting pangolins hidden in a shipping container behind a façade of frozen fish. This was one of the largest seizures of the animals on record. ‘Wildlife crime is big business,’ says Paul. ‘It will stop only when the demand stops.’”

Winner, Urban: The Alley Cat by Nayan Khanolkar / Wildlife Photographer of the Year
“With growing human-leopard conflict grabbing the headlines, Nayan was determined to show things could be different. Positioning his camera trap so a passing cat would not dominate the frame, the wait began. After four months, he finally captured this unique human-leopard co-existence as this big cat weaves its way silently through the alley.”

Winner, Invertebrates: The Dying of the Light by Angel Fitor / Wildlife Photographer of the Year
“Struck by their uniqueness, ‘like a living island,’ Angel waited three years for a lone jelly on a calm night, when the sunset was at its best. A bubble of trapped air under the umbrella of this one, from being flipped in the wind, meant it couldn’t dive and so wouldn’t survive for long.”

Winner, Plants and Fungi: Wind Composition by Valter Binotto / Wildlife Photographer of the Year
“Using a long exposure to capture the drifts of pollen and a reflector to highlight the catkins, Valter took many shots of this hazel tree before the wind finally delivered his desired composition. ‘The hardest part was capturing the female flowers motionless while the catkins were moving,’ explains Valter.”

Winner, Underwater: Snapper Party by Tony Wu / Wildlife Photographer of the Year
“Tony was surprised there weren’t many photos of the two-spot snapper mass spawning – until he hit the water. The currents were strong and unrelenting and his first attempt failed. But by positioning himself so the action came to him, Tony captured this dynamic arc of spawning fish in the oblique morning light.”

Winner, Black and White: Requiem for an Owl by Mats Andersson / Wildlife Photographer of the Year
“In the first light of dawn, Mats used black-and-white to capture the melancholy moment following the death of this pygmy owl’s partner. The pair had accompanied Mats on his daily walks through the forest during the early spring. He recalls how ‘the owl’s resting posture reflected my sadness for its lost companion’. Soon after he found this owl dead too.” 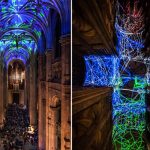