Earlier this year, a Reddit thread posed a simple-yet-brilliant idea. “Add ‘ing’ to the end of a movie title,” it instructed, “what is the movie about now?” With the addition of these three letters, the entire premise of blockbuster films are completely changed. Titles are transformed from nouns into verbs and communicated actions rather than a person, place, or thing. The results were both amusing and showcased the power of language from seemingly small change.

Inspired by this metamorphosis, fellow Redditor shifter2000 turned some of the submissions into movie posters. Jurassic Park became Jurassic Parking and is now an uplifting tale with the tagline, “Against all odds, a T-Rex starts a valet service despite his inability to reach the steering wheel.” Likewise, The Jungle Book is The Jungle Booking, where characters in the film have the forest all to themselves.

Once shifter2000 posted his handiwork, fellow Redditors came up with plots and even theme music for the new “films.” It sounds like we’ve got some hit movies on the horizon! 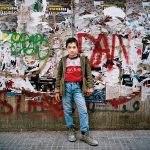