Have you ever craved a simpler way of life? Co-owners and sisters Heather Coulombe and Sandee Maclean appeared to have offered thousands of people the opportunity at their dream job when they posted open positions for their establishment The Farmer’s Daughter Country Market, located on the island of Cape Breton in Canada. Rather than offering “big money,” the siblings propose bountiful land as compensation.

In a post on Facebook, they wrote, “If you decide this opportunity might fit your dreams and goals for a close to nature and community focused life, then we are willing to offer you 2 acres of woodland where you can immediately set up your tiny house or quaint cabin. Plus give you access to our farmland and other resources we have available,” the sisters explain. “If you are still working with us after five years and we all still like each other after that time, then the land is yours for the cost of migrating it out and putting it in your name.”

They had a strong idea of who would be the ideal employee. “We are looking for people who are environmentally conscious, want to be part of a community and will see our business not as you work for us, but we all work together to create something to be proud of. If you take pride in being friendly, helpful, and positive and have skills in the food industry or customer service, then you are who we are looking for.” They also specified that applicants must have a Canadian work permit.

The store had previously searched for staff using conventional recruiting efforts and were unsuccessful. Through the Facebook advertisement, however, the sisters received more than 3,500 responses. “Cape Breton is amazing but our population is decreasing,” the ad boasted. “Corporate development has been seen as the solution in the past but that often comes at the expense of our environment. We think there is a better way.” In mid-September, they selected three people to begin employment and are planning on hiring three to four more people for the spring.

Cape Breton’s population is approximately 135,000, and this isn’t the first time the region has made efforts to encourage emigrants to settle. Last February Mary Tulle, CEO at Destination Cape Breton, led a campaign that cautioned, “Don’t wait until Donald Drumpf is elected president to find somewhere else to live.” They appealed to Americans and other foreigners alike, stating: “Start your new life in Cape Breton, where women can get abortions, Muslim people can roam freely and the only walls are holding up the roofs of our extremely affordable houses.”

All images via The Farmer’s Daughter Country Market. 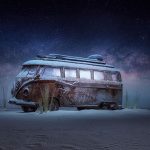