The United States lost a judicial titan with the passing of Supreme Court Justice Ruth Bader Ginsburg on Friday, September 18, 2020. The iconic woman, who passed away due to complications of metastatic pancreatic cancer, was a heroic advocate of gender equality and became a cultural symbol of strength and hope for younger generations, earning the nickname “Notorious R.B.G.” (a play on the name of the rapper Notorious B.I.G.). In tribute to Ginsburg, the Fearless Girl statue outside the New York Stock Exchange wore a lace collar over the weekend, paying visual homage to the Justice’s penchant for embellished neck accessories.

Ginsburg’s famous collars were more than just a fashion statement. The elaborate accessories symbolized her powerful position as the second woman ever to serve on the U.S. Supreme Court. Ginsburg’s collars allowed her to stand out from a sea of dark judicial robes like a shining light. “You know, the standard robe is made for a man because it has a place for the shirt to show, and the tie,” Ginsburg said in a 2009 interview with The Washington Post. “So Sandra Day O’Connor (the first female Justice on the court) and I thought it would be appropriate if we included as part of our robe something typical of a woman.”

Ginsburg had a large collection of collars, but her white lace piece is a fan favorite. A replica of the collar was placed on the Fearless Girl statue as part of an advertisement by State Street Global Advisors, the asset management company that originally commissioned the statue. The ad was featured in the Sunday edition of The New York Times, showing the statue wearing the Ginsburg-inspired lace collar, with the words “Here’s to the original.”

The Fearless Girl statue was first installed in Lower Manhattan on International Women’s Day in 2017, facing off with Wall Street’s iconic bull statue (which later moved outside the New York Stock Exchange). The bronze sculpture signifies State Street Global Advisors’ commitment to including more women on company boards. “What this girl represents is the present, but also the future,” Stephen Tisdalle, State Street’s chief marketing officer shared. “She’s not angry at the bull—she’s confident, she knows what she’s capable of, and she’s wanting the bull to take note.” Adding the lace collar to the statue is a way to pay tribute to the life and legacy of Justice Ginsburg, and to highlight the tremendous work she did in improving women’s rights.

In tribute to the late Justice Ruth Bader Ginsburg, the Fearless Girl statue outside the New York Stock Exchange wore a lace collar over the weekend.

Someone added a collar to the Fearless Girl statue in NYC. Notorious. from r/pics

The collar was placed on the Fearless Girl statue as part of an advertisement by State Street Global Advisors. 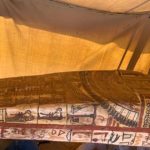 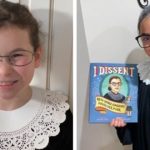