Filmmaker Brandon Li stumbled upon an unexpected capture when reviewing stills from a drone test. If great photography is a balance of skill, timing, and luck, Li certainly had a combination of all three.

“A friend and I were testing out a DJI Phantom 3 in the Wan Chai/Causeway bay area of Hong Kong, mostly trying to catch the sunset,” Brandon explains to PetaPixel. “But the battery was almost dead so we pointed the camera down to catch another angle and let the drone return to home.”

That decision to aim the camera down was the key to capturing this breathtaking still frame of newlyweds sprawled on a lawn atop the J Residence in Hong Kong. Li hadn’t even realized he’d gotten the image until looking at the footage on his computer. “[I have] no idea who they are, but I assume they were practicing a pose for a wedding photograph or something,” he shares. “Or maybe they were just making lawn angels.”

After a bit of color correction to make the couple stand out and cloning out “what appeared to be either some extra clothes or another person standing near their feet,” Li published the photo is hopes of discovering the identity of the mystery couple.

Have any guesses? Extra points if you also know who the man laying on a piece of furniture in the upper corner of the roof is.

All images via Brandon Li. 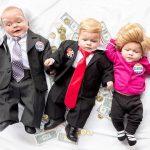 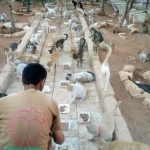