No one enjoys getting a dreaded flat tire while cycling. Patching and pumping can help, but if you’re stuck without the right tools, you may find yourself in store for a long walk home. A company, based out of Utah, is looking to solve the issue with two new airless and tubeless tire options—Nexo Tires and Ever Tires. It isn’t reinventing the wheel—pun intended—but rather developing a model that is a product superior to the current airless options, which haven’t caught on due to poor stiffness and shock absorption.

The founders were running a cycling shop, changing out thousands of tires, when they began developing a durable and eco-friendly solution. “Nothing ruins a bike ride or commute faster than a flat, and flats can cost between $15 and $30 to fix, so to save our customers money and the frustration of a flat, we created a better solution,” shares Dave Ballard, Nexo Tires and Ever Tires co-founder. “We believe Ever Tires and Nexo Tires will be something every cyclist will want once they hear about them.” Aside from cost savings, the puncture-proof tires can make a dent in to 10,000,000 bike tires and tubes discarded every year. They are also made using a one-step injection process that drastically cuts down on the energy used to produce regular tires—which typically require an 8 to 9 step manufacturing process.

Two different tire sets will be produced at the end of their already successful Kickstarter campaign—one to be mounted on existing wheels and one that replaces the entire wheel set. Durability tests have shown the existing wheel mount (Nexo) to last 3,100 miles, while the wheel set replacement (Ever) will get you 5,000. As an added bonus, the tires weigh as much as a regular tire tube and liner and are even available in different colors.

Nexo Tires and Ever Tires plan to make its first shipment within the United States in January 2017, with the Nexo DIY kit available for a pledge of $75 and Ever tires sets ranging from $76 to $105, depending on tire size. Soon, you’ll never have to worry about a stray thumbtack or nail putting your bike out of commission.

All images via Nexo Tires and Ever Tires. 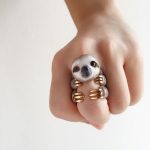