Ivy Diep found the homeless pup wandering the streets in January 2014. Matted, skinny, and alone, Diep decided to take Popeye home with her, where he instantly hit it off with her husband and other canine companions.

One day, she allowed the now 3-4 year old pooch to tag-along on one of her “Instagram dates”—outings in which she and a friend try new restaurants and document their meals on the social media site—and realized that Popeye makes a surprisingly polite dinner date. “I would bring Popeye to any of the pet-friendly places, and we realized how good he was around food,” she told ABC News. ”He would sit still for photos.”

Popeye then began making regular appearances in Diep’s restaurant snapshots, prompting her to create Popeye the Foodie Dog, an Instagram account dedicated to his culinary adventures. The page features photographs of Popeye—often clad in adorable themed costumes—patiently posing with plates of food, from steak and sushi to fast food and donuts. While he may look like he’s about to sink his teeth into each delicious meal, Diep confesses that is not quite the case: “We’ll give him nibbles of anything that’s safe for him,” she explains. “We always carry a bag of his favorite treats as well. He’s usually not really into the food anyway. He just likes to be out and about—people watching and to bark at any other dog that walks by.”

Be sure to follow Popeye’s adorable dog-blogging adventures on his Instagram—a perfect place for food connoisseurs and dog lovers alike!

All images via Popeye the Foodie Dog. 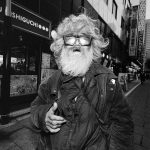 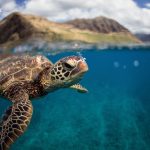