An 8-year-old girl named Gianna sleeps under a tree-canopied, floating lantern-lit sky every night, thanks to her artistic Disney-loving mother, Jennifer Treece. The mural is inspired by the 2010 Disney movie Tangled, and showcases a romantic boat scene of Rapunzel and Flynn Rider. Treece says that the 60 hours she spent on the painting would have never been possible without her daughter’s support. She tells The Huffington Post, “[Gianna] saw me painting it from beginning to finish. She would come home from school and run in her room to see what progress I had made.” The creative mom also listened to the movie’s soundtrack countless times to keep her motivated—and for pure entertainment. “I always had the movie playing on repeat as I painted,” she admits. “It gives me genuine joy…It’s like I’m transported into my favorite worlds and I get to create my very own scenes in them. It feels magical.”

Treece has always been interested in art, but only began painting seven years ago. She has already completed paintings featuring other Disney princesses, such as Belle from Beauty and the Beast and Sleeping Beauty. She chose Rapunzel as the subject for Gianna’s mural because, Treece writes, “Her daring, adventurous spirit and the way she holds onto her dream are inspiring to my daughter and myself.”

In the near future, Treece plans to apply clear UV paint over the mural’s lanterns and add a black light beside Gianna’s bed to make the painting really glow. After that, her dream is to become a licensed Disney artist and a children’s book illustrator, so she can let her hair down—Rapunzel-style—and draw what she loves.

See the mural’s complete transformation, as Treece started with the nightsky.

Even a strand of Rapunzel’s hair makes an appearance!

And here’s Gianna admiring the brand new mural in her room. 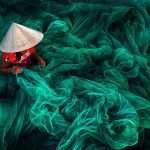 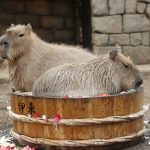