As a film fanatic, Vugar writes, directs, produces, and edits short videos. His eclectic portfolio presents a wide range of material, from documentaries to experimental compilations. Earlier this year, he released Film Meets Art, a captivating piece that explores the relationship between fine art and cinema. Featuring excerpts from well-known movies like Django Unchained and Psycho as well as work from renowned painters like Leonardo da Vinci and Sandro Botticelli, the three-minute film combines two of Vugar’s passions: art and, of course, film.  Following the project’s success—and Vugar’s claim that “there are plenty of movies more to include”—he debuted a second installment, Film Meets Art II.

Like its prequel, Film Meets Art II features skillfully compiled, side-by-side comparisons of well-known movie scenes and the iconic paintings that inspired them. While the likeness between some of the juxtaposed works is obvious—like the sentimental scene from Steven Spielberg’s Empire of the Sun and the nearly identical Norman Rockwell painting that served as its muse—others are a bit less clear, like The Exorcist’s subtle reinterpretation of René Magritte’s L’Empire des lumières, and Metropolis’ understated homage to Brugel.

Whether crystal clear or more surprising, each captivating comparison spotlights Vugar’s astute and artistic eye, and once again illustrates his belief that “all art forms feed off from each other, and film is no different.”

My Modern Met granted permission to use media by Vugar Efendi. 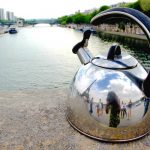