Ancient mosaics have a long history of helping bring clarity to the traditions and history of rich cultures. Beginning in Mesopotamia, the practice allowed powerful cultures to show their wealth and artistic skills. Therefore, it should come as no surprise that Turkish archeologists have been uncovering incredible ancient mosaics—including a new find in the southeastern city of Şanlıurfa.

The 1,800-year-old mosaic immortalizes two men and two women, each laid out within individual squares and accompanied by Syriac inscriptions. A team of archeologists working on the historic Castle of Urfa discovered these portraits of the deceased. And while they aren’t the skeletons you may think of when it comes to commemorating the dead, these funerary portraits are a common floor motif. As a large funerary space, it is typical for a necropolis to contain imagery that artistically honors the dead. The team, which is working on a project to restore rock-cut tombs over 45 acres in the region, estimates that the mosaic dates to the first or second centuries CE.

Using muted colors and simple lines, the mosaic depicts the deceased buried in the necropolis. While little is known about who they are, the initial dating of the mosaic tells us that they would have lived anywhere from 132 BCE and 639 CE. It was a period when Şanlıurfa was known as Edessa—a kingdom of cultural significance. While scholars remain divided on the issue, Jewish and Muslim religious tradition suggests that Şanlıurfa, also known as Urfa, was the hometown of Abraham. The Kingdom of Edessa is also where Syriac dialect was developed, and Syriac literature flourished. As the language of ancient Syria and a dialect of Aramaic, Syriac was spoken across the Fertile Crescent. And if that weren’t enough, the area is also of great significance to Armenians, as the Armenian alphabet was thought to have been developed there.

After excavation work on the 80 additional tombs discovered in the area is completed, the sites will be open to the public—a move meant to stimulate tourism in the area.

Detail of the mosaic.

All images via Şanlıurfa Metropolitan Municipality. 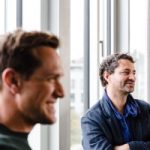