London-based photographer Alma Haser experiments with mixed-media and tactile techniques in her portrait work. Drawing upon her fascination with identical twins, she has produced ‘Within 15 Minutes’: a series of jigsaw puzzles that combine equal parts of each twin.

Similarly to both her ‘Cosmic Surgery’ portraits and ‘The Eureka Effect‘ collages, ‘Within 15 Minutes’ began with a photograph, or in this case two — one of each twin. The post-production stage is where Alma’s creativity erupts: she shreds, folds and duplicates her imagery to produce meticulous masterpieces. The title of the series; ‘Within 15 Minutes’, references the average time between the birth of each identical twin. As a result, they share everything appearance-wise — except their fingerprints. Alma states “Identical twins do not have the same fingerprints because, even in the confines of the womb, the fetuses touch different parts of this environment, creating small variations in the same fingerprint and therefore making each of them unique.” Alma channels these slight differences through the fragmented nature of the puzzle medium. After receiving each twin in puzzle form, Alma painstakingly swapped every second piece of the puzzles to create a complete and captivating concoction of the two. The result is both intriguing and eerie, forcing one to look deeper in attempts to distinguish one twin from the other. 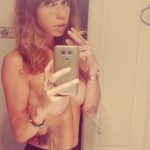 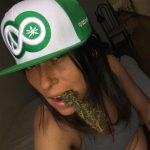