Tattooist Jason Stieva has been creating assemblage art for almost 20 years, extending his creativity beyond the flesh and into three-dimensional space. For the past nine years, he’s been working on his Gothic Times series, which began when he acquired a portion of an old clockmakers estate. Mixing cases and mechanisms with other found materials, his sculptures are wildly surreal and filled with detail.

For Leviathan – Ark of the Apocalypse, Stieva spent about 15 months creating the ghostly pirate ship filled with savage characters. As the owner of his own tattoo studio, Sinful Inflictions, his artistic work is done in his spare time. “Sculpting is a lot different than tattooing which I can do anytime,” he tells My Modern Met. “With sculptures, I have to be in the mood to work on them and not be forced with deadlines.”

The inspiration for the piece began when Stieva spied a scale model of a tallship mounted to the ceiling of a store he often visited. After admiring it for some time, he began work creating an ark that would carry all sorts of mutated animals and creatures. The final product measures 8 feet high, 7.5 feet long, and about 2.5 feet wide.

“Overall it was the most daunting project I’ve ever worked on and will probably ever create,” he shares. “There is a lot of extremely tedious detail from front to back, top to bottom. Just severing the army heads alone and sanding the back of each to be certain they would sit flush once applied with tweezers took weeks. Sourcing all the characters took quite a while. Redesigning, taking apart, rebuilding, and making the ark structurally sound long before any sculpting began took quite a while.”

Now, the ship sits in the home of one of Stieva’s clients, an avid collector who had the artist tattoo a ship on his chest. And Stieva continues to build—scouring garage sales, flea markets, auctions, and thrift shops for more materials to bring his fantastical sculptures to life.

It took over 15 months to complete this ghostly pirate ship, which is now in the home of a private collector.

My Modern Met granted permission to use photos by Jason Stieva. 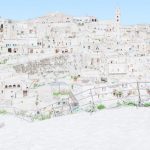 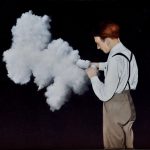